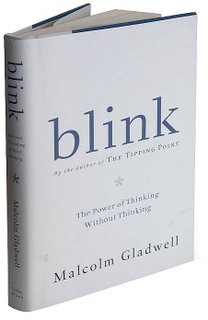 I recently downloaded the audiobook Blink :: The power of thinking without thinking by my fav non-fiction author... Malcolm Gladwell

Its unabridged and read by the author... which, IMO, adds to the experience - MG has a way with words and reads his own story really well... just as he did with ((the tipping point))

Where did you get the idea for "Blink"?

Believe it or not, it's because I decided, a few years ago, to grow my hair long. If you look at the author photo on my last book, "The Tipping Point," you'll see that it used to be cut very short and conservatively. But, on a whim, I let it grow wild, as it had been when I was teenager. Immediately, in very small but significant ways, my life changed. I started getting speeding tickets all the time--and I had never gotten any before. I started getting pulled out of airport security lines for special attention. And one day, while walking along 14th Street in downtown Manhattan, a police van pulled up on the sidewalk, and three officers jumped out. They were looking, it turned out, for a rapist, and the rapist, they said, looked a lot like me. They pulled out the sketch and the description. I looked at it, and pointed out to them as nicely as I could that in fact the rapist looked nothing at all like me. He was much taller, and much heavier, and about fifteen years younger (and, I added, in a largely futile attempt at humor, not nearly as good-looking.) All we had in common was a large head of curly hair. After twenty minutes or so, the officers finally agreed with me, and let me go. On a scale of things, I realize this was a trivial misunderstanding. African-Americans in the United State suffer indignities far worse than this all the time. But what struck me was how even more subtle and absurd the stereotyping was in my case: this wasn't about something really obvious like skin color, or age, or height, or weight. It was just about hair. Something about the first impression created by my hair derailed every other consideration in the hunt for the rapist, and the impression formed in those first two seconds exerted a powerful hold over the officers' thinking over the next twenty minutes. That episode on the street got me thinking about the weird power of first impressions.

Blink is all about the power and intuition of the first impression... and its a good read. Check it out.

Posted by weareallghosts at 7:00 am

...have you noticed how many new books are copying Blink's graphic style on the cover?...seems to have started a new trend

I have a story similar to his with the hair, only mine has to do with style of dress.

Typically I dress very casually, rolled up jeans, converse sneakers and a T-shirt usually does it for me. One day I had to dress as a secretary for some TV extra work, so I headed to a thrift store and found a knee-length skirt, a nice blouse, and some tasteful pumps. I had some time before I had to be on set, so I headed to a Starbucks for a coffee. As I approached the door, a man who had been standing outside snapped to attention and ran to open the door for me. "There you go, ma'am! Have a nice day!!" Huh? Nobody ever did that for me before. I joined the queue, waiting my turn to buy my coffee. When the man in front of me was told his total, he looked back at me and grinned and said, "And I'll pay for whatever the lady is having as well." What??? Huh?

I am used to being fairly invisible to the everyday man. I wondered to myself if I should start wearing skirts everyday, and would I ever have to pay for coffee again?

Frankly, I was disgusted, not at the men's kindness, but at human nature and it's attachment to surface impressions. I am the same person in a ratty t-shirt as I am in a secretary's outfit, aren't I? Rather than give up on the human race, I have tried to treat each person I come in contact with as worthy of respect, no matter what they look like. Sometimes I slip up and my own prejudices are revealed, but God is good and forgives me.

The concept around Blink fascinates me... how first impressions actually do matter.

I tend to dress similarly... except my sneaks tend to be limited ((its a disease... I know)) and it is amazing how we are judge because of the veneer that surrounds us.

Being a member of the Salvation Army... I face this regularly. Either in uniform or out... the minute I mention TSA people jump to all sorts of conclusions.

Thank God that He looks to the heart... Think David's annointing as King and you get the gist.