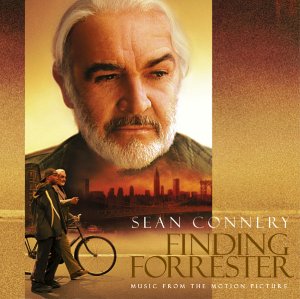 I love soundtracks... especially ones that capture the mood of the film (if I enjoyed the film) or ones that I can recontextualise into a soundtrack for a moment in time in my own life.

I picked up the ost for ((Finding Forrester)) yesterday in a charity shop on Byres Road for £1. I am a big fan of ((Miles Davis)) and have a fondness for his '70s work... when he went all electric and fused jazz with rock and world flavours. I am grateful to my old friend, Roberto, for switching me on to [ fusion ] - its hard to listen to... it isn't obvious... you can't dip your toe in... you need to emerse yourself in it and when you do you'll find it worthwhile (as long as you are in the mood... if you aren't you are likely to go insane!)

This CD has some great electric Miles pieces... especially Black Satin that I discovered on a David Toop curated compilation CD on ambient music entitled ((Ocean of Sound)) - based on his book of the same name. It is an amazing piece of totally emersive ambient fusion... or crazy dissonant noise... depending on who you speak to. Which made me think about what a strange choice for a soundtrack... brave but strange!

There is more traditional soundtrack fare... like the supersweet Hawaiian version of Over The Rainbow / What A Wonderful World by Israel Kawiwo'ole which is just lovely! and the tracks by or including Bill Frisel which capture a haunting atmosphere.

All in as a compilation it works well and makes me want to see the film... although, from reading the review on Amazon I don't think the tracks actually appear in the film which adds to the strangeness of the choice... but also adds to the appeal.

Posted by weareallghosts at 2:20 pm